It is pretty common for casual gamers to confuse Rust as just another copycat of the famous survival game DayZ, and while Rust started out with such an objective, it now has its own unique identity that makes it one of the must-try games for those interested in the survival games genre. Rust has been topping the charts in its category for a very good reason – it is a fantastic game that one could not help themselves but fall in love with. Its attractive and enchanting gameplay has been the fuel behind Rust propelling to the top of the downloading charts and Playing Rust.

Top Five Most Important Things to Know Before Playing Rust 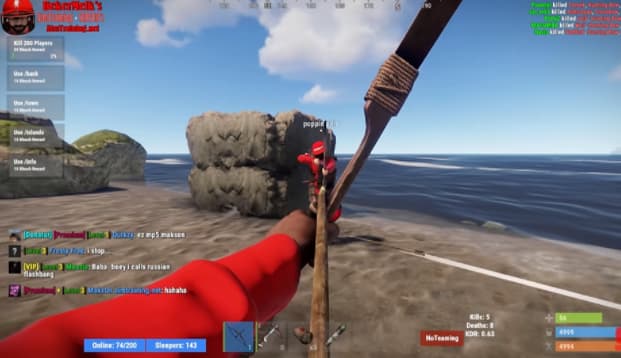 But while this multiplayer survival game is popular, one should not make the mistake of thinking of it as an easy game where anyone can just walk in and win a couple of rounds. That stuff does not happen in Rust; in fact, one could make a substantial argument that Rust is one of the most challenging games for a beginner in 2021. It is tough for one to get familiar with the gameplay as you would not get an in-depth crash course from the admins of the game and would be expected to swim with the sharks, metaphorically speaking, on your own. But if you are a new player, all is not lost for you. You can buy rust cheats to improve your gameplay.

Here are some important things that every rust player must know before they start their gameplay.

It might seem like a weird point, but you read that right; weapons are not and should not be your priority in Rust. Sure, you need a weapon to tackle any enemy combatant, but they are not the only danger you would face in the game; the environment is an enemy in itself, and that is why you need to prioritize gathering resources and building tools before weapons to survive in Rust. Mining nodes, building bases, and also hunting animals would make up for the vast portion of your gameplay, and that is why you need to have proper, functioning tools with you to survive in the game of Rust. Wood, spring, gears, etc., should be at the very top of your search list as they build the tools that will help you survive in the game of Rust. A bow should be one of the first weapons you make, as you can easily hunt animals with it.

In Rust, you cannot and should not trust anyone as sooner or later they are only doing to stab you in the back. Rust is a survival game, and while you would think that banding together and pooling your resources among the group would be a better and more viable strategy, it is also a game of desperation, and in desperation, people do all sorts of things, like killing a trusted partner and stealing their resources. It does not mean that you should not form an alliance or only go solo in Rust, but when you join or group or partner up with someone, always be wary of the tricks they will play.

A revolver is one of the most accessible weapons you could construct using the supplies you gather in Rust. And it is highly recommended that you construct one as they are highly accurate and would deal significant damage to whoever is on the other end of the firearm. Revolver is the staple sidearm for players that have made it past the beginning stages of games, have built multiple hiding spots across the map, and are looking for an inexpensive weapon. But again, reiterating the first point on the blog here, you should only focus on weapons after you have built tools in Rust.

Wood is a precious commodity in Rust, as any and every tools, weapon, and even base need wood to be constructed. One cannot do much without gathering this all-important resource in Rust. Luckily for players, wood is available in abundance in Rust, and one should make the most of them. But gathering just the right amount of wood required for the project is not the smart way of collecting this precious resource. You need to collect as much wood as possible and store some with you for future use so that you do not need to run and chop a tree to get wood during emergencies.

If you are just starting the game, you should recite a mantra to win in Rust – run when it is an option available to you. Rust is a game that tests the gamers’ ability to survive in a hostile condition, and while combat is a crucial part of the game, if you can avoid combat, you would see your chances of survival in Rust skyrocket.