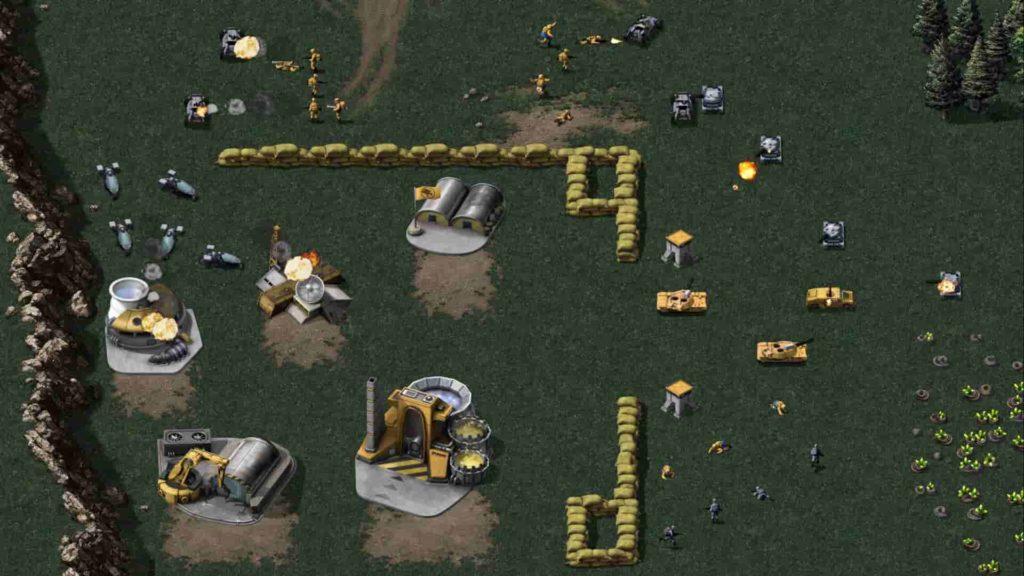 You might already be knowing about the game command and conquer and there might be various reasons to look for the alternative. The reason might be of price hike, high access to your data and RAM, or might be you are so affectionate about the action games that you want to enjoy more and more.

What Makes the Game So Exciting and Unique

The Game ‘COMMAND AND CONQUER’ has is a real-time strategy-based Shooting game that can be played by a first-person shooter.

The game was developed by Westwood Studios and published by Virgin Interactive Entertainment. The video game can be played on different platforms of Apple Macintosh, PlayStation, Sega Saturn, Xbox 360, PlayStation 3, and much many more. The game was first released in 1995 and last updated in the recent year of 2013. The game is a full motioned game that is based on the Historical-themed world where Allied Forces battle against the Soviet Union in order to combat and encroach the European Mainland.

One team battle against another team and destroys their army, loot their crew and army and conquer the territory. You as a commander can win the battle, challenge the other army, defend your army units and defend the other and their plan to take over your territory.

You will be rewarded and by collecting Medals and rewards rank to the high post and win the other troop as well.

The game is realistic graphic embedded and it keeps you engaged with the game which you can enjoy.

Rise of Nations is the game designed by Brian Reynolds, Published by Microsoft Game Studios, and developed by Big Huge Games. The game was first released on the 20th of May 2003 with the gold edition of it in 2004. It is a single as well as a multiplayer game which you can play with your friends and family to enjoy the most of it. this video game can be played on the platform Microsoft Windows, OS X to give you the different platforms to play and enjoy the game.

Well even though the game doesn’t offer you a wide range of armies and territories in the beginning but as you proceed with the game you will be able to explore different areas and by building your structure you can claim more lands.

Another RTS-based game includes the Sequel of the series which is far more advanced in the feature where you can set your own game world. The game is based on making a ship to send the galaxy of the new human era. All the humans are divided into 3 colonies and they fight each other to reach there keeping their own beliefs on the new land.

The game is real-time strategy-based, which gives your single as well as a multiplayer platform to play. So you can enjoy the game with your friends and family as well.

The game was designed by Bradley Rebh and Mike Marr which was developed by Gas Powered Games and ultimately published by THQ, Square Enix. The game was released on November 6th, 2007, and can be played with the os Microsoft Windows.

This video game is a real-time strategy-based game that was designed by Rick Goodman, Developed by Stainless Steel Studios, and Published by Sierra online in the year 2001.

The game can be played by single as well as multiplayer and on the platform of Microsoft windows.

In the game, players collect different resources to construct a building of their choice in the territory there, prepare their own crew to fight against the other, and conquer their territory and other civilization. It starts from the Prehistoric age and ends in the Nano age.

Another real-time strategy-based game that can be played on the platform Microsoft Windows is Relic Entertainment’s developed game ‘War hammer 40k’. The game was designed by Jay Wilson and their company and published by Alex Garden in the year 2004.

The game gives your single as well as a multiplayer feature to enjoy with your friends. By 2013 the game has sold more than 7 million copies worldwide.

The game is a mix of Science and fiction where you have to fight against your enemy and keep human existence alive.

Here comes another piece of real-time strategy-based video game that gives access to its single-player as well as multiplayer to play the game on the platforms of Microsoft Windows, OS X, and Linux.

The game was programmed by Remy Saville, developed by Relic Entertainment, and published by Sega, Feral Interactive in the year 2015 dated 25 June of the year.

This game was focused on Eastern front wars in which the player primarily controls the Soviet Red Army side. This is a game of fighting and conquering, and you will enjoy it the most.

The game is real-time strategy based which gives you a single as well as a multiplayer platform to play and enjoy with your friends.

This is like a Traditional RTS game in which the player can make their own bases, army, and troops to fight against the enemy, bring down them and conquer their bases with the help of different machines and real-time graphics.

The game can be played on the platforms like Microsoft Windows, Xbox 360. This video game was given the beautiful touch designed by Dave Pottinger, Developed by Ensemble Studios, and finally published by Microsoft Game Studios first in the year 2009 on 26 February.

The game is real-time strategy-based and allows single as well as multiplayer access.

Ruse: The art of Deception comes as the next in the game series for games like command and conquer generals. Via the game, players can experience the world war II fights where they can fight to form the air as well as land with several weapons and machineries like Guns, tanks, and aircraft and challenge your enemy strength who are invading your territory from all the areas.

The game can be played on the platforms like Playstation 3, Microsoft windows Macintosh OS, Xbox 360.

The game gives you single as well as multiplayer access with real-time strategy play. The game was developed by Eugen Systems and Published by Ubisoft first on 7th September 2010.

The Settlers is a City-Building and management game that comes under the category of MMORTS Video Game. The game gives the player a platform to build a city, conquer your bandit enemies, and as you process you earn experience points and resources by cracking various quests.

This real-time-strategic game can be played on the platforms like MS-DOS, Nintendo DS, Microsoft Windows, OSX, IOS, Android, Web OS, Browser, and many more platforms to give you’re the best experience of it.

This game The Settlers can be played as an online game so, you need to have only data access and you can enjoy the game.

This game comes in the categories of Real-time tactics and real-time strategy-based games which give access to single as well as multiplayer to enjoy the best of it.

The game was designed by Magnus Jansen, Developed by Massive Entertainment, and published by Vivendi Games in the year 2007 of the month September on18th. It can be played on the platform of Microsoft Windows, Xbox 360, and PlayStation 3.

This game makes your first lieutenant where you can command your troops on the battlefield to win over the other troops with the help of infantry, tanks, air force, additional troops, artillery strikes, etc.

The game is set for the batter between the Soviet Union for its power. Via the game, you can visit Russia, Europe, and the United States of America.

The game gives you the real feeling of conquering where you will attack your enemy with the help of tanks, air forces, and land forces. This also gives you tutorials to understand the gaming plot, situations, and empire allies to save yourself back from attackers.

With several campaigns, you can gather resources, create units and unlock your new ability every time you proceed.

You can play this game on the platforms like Android, iOS, and abode flash player. You can also play the game on your mobile and download the application from the play store of Google.

This game is another set of real-time strategy based game which can be played on the platform of Microsoft Windows by single as well as multiplayer access. The game was designed by Alexis, Inc. and developed by Eugen System. The game was first published on 15th March 2005.

The game has set a plot of gas war in the future where its price will touch sky bringing the whole world war.

The battle goes around the several cities of the USA with the excellent quality of graphics and gives you real-time engagement.

The above-mentioned games are filtered and produced to you to boost your video gaming experience of virtual social life ecstasy. Do refer to the Games mentioned here as the top 12 best alternatives Games Like Command And Conquer among the others already present in the market.

If you like the information given to you above for your best video gaming experience helpful and useful, then let us know via dropping your comment in the section below. If any query contacts us on our official mail.